PBB is an incentive given to government employees in accordance to their performance and contribution to the accomplishment of their agency’s overall targets and commitments.

“We are delighted that the DBM has granted our request for reconsideration on the matter of the PBB. We truly appreciate the desire to recognize the contributions of DepEd to the fulfillment of goals of the government,” Education Secretary Leonor Magtolis Briones said.

“Thank you DBM, CSC and most of all, to the DepEd staff, who worked tirelessly to ensure that the PBB will be granted,” Briones added.

The AO25 Inter-Agency Task Force (IATF) sets specific conditions and reviews the agency’s compliance and accomplishments within a fiscal year to determine the eligibility of the agency and its personnel to receive PBB.

The Task Force has decided to grant the 2018 PBB for teaching and non-teaching school-based personnel in all elementary and secondary schools nationwide, subject to the submission of DepEd’s school level performance rating and ranking. To date, school level performance ranking reports, which will be the basis for processing the bonus, have been submitted to the Task Force and DBM for funding.

Notwithstanding the decision of the AO25 IATF, the Department is committed to appeal for re-consideration and exhaust all possible courses of action for its non-school-based personnel to likewise receive the PBB.

“We are still appealing to the DBM and AO25TF to reconsider the grant of eligibility to all DepEd non-teaching staff too, especially that they have been contributors to the improvement of the performance indicators of the DepEd and will be the ones who will be directly exposed to extreme risk and hazards during ECQ in processing the payment of the PBB 2018 for the school-based positions,” Briones emphasized.

DepEd has been found to be non-compliant with the Transparency Seal, PhilGEPS Posting, and two other reports under General Administration and Support Services and Cross-Cutting Requirements. This has led to the decision to deny the grant of 2018 PBB of the non-school-based personnel in DepEd Central Office (CO), Regional Offices (ROs), and Schools Division Offices (SDOs). 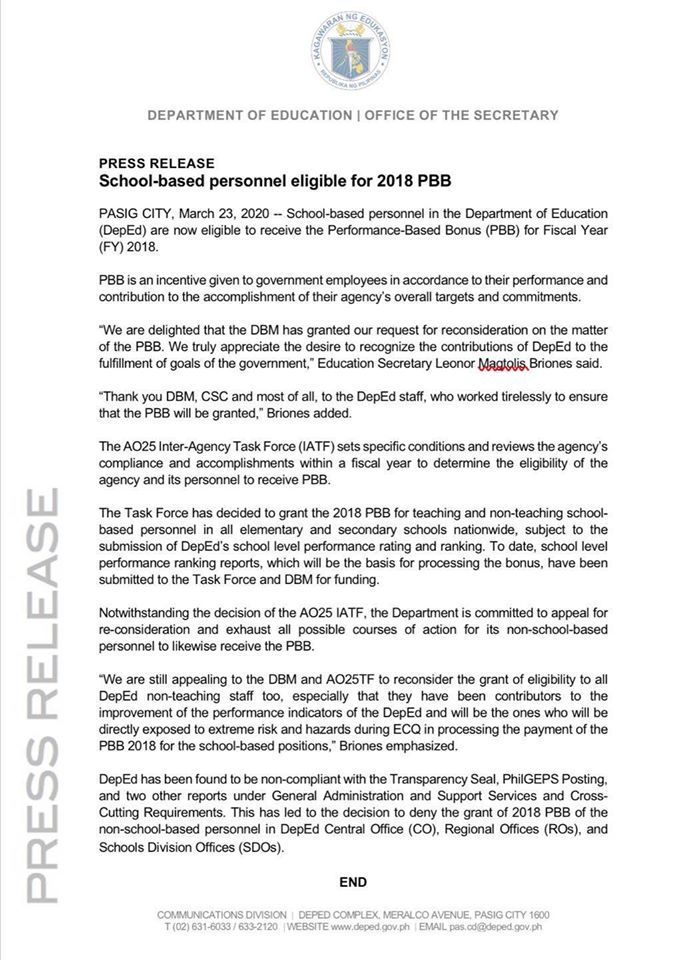